Trickster 500 offers two popular variations: American and Australian. The primary difference between these two is that the American variation has only one round of bidding. In the Australian version, bidding continues until three of the four players have passed.

Ten cards are dealt to each player. The remaining cards are left undealt and comprise the “widow” (“kitty” in the Australian variation). These cards are added to the player’s hand who wins the bid. That player must then discard an equal number of cards.

Following the deal, starting with the player left of the dealer, each player may place a bid consisting of a number of tricks and a suit, choose to bid “Nullo” or “Open Nullo” (“Misère” and “Open Misère” in the Australian version, or Pass. Bids must be higher than the previous bid, if any.

In the American version, the 6-level bids of the first two players to bid are special bids called “inkles.” Inkle bids cannot win the bidding; they are used to indicate strength in a suit to the bidder’s partner. Bidding begins at the 7-level for the last two players to bid. American version bidding is just one round. If everyone passes, the deal advances and the cards are redealt. 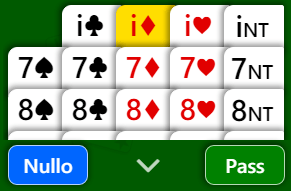 Bid choices for American 500 following an i♠ initial bid. The yellow highlight indicates the suggestion.

In the Australian variation, bidding starts at the 6-level for all players and continues around the table until three players have passed following a non-pass bid. Players who pass may not reenter bidding.

Example bids for Australian 500. The yellow highlight indicates the suggestion.

The player who wins the bid leads the first trick.

If the bid is no-trump, the joker wins any suit in which it is played. It, however, can only be played when the player is out of the led suit. If there are two jokers in the game and both are played on the same trick, the monochrome (black) joker beats the color (red) joker.

The player who takes the trick leads the next trick. If the bid is no-trump and the player chooses to lead a joker, he or she is asked to choose the suit which other players must follow. The joker is considered the highest-ranked card of that suit and will win the trick.

If the team that won the bid takes at least the number of tricks indicated in the bid, their score is increased by a value based on their bid (see the following table). If they miss their bid, the same value is subtracted from their score.

The opponents (team that did not take the bid) earn 10 points for each trick taken. When playing with the game option “must bid to win,” these points are awarded only up to when the team’s game score is 490 points.

The game is over when either team exceeds 500 points, or a team goes below −500. The team with the higher score wins unless the game option “bidder goes out” is set. In the case of “bidder goes out,” if both teams go over 500, the bidding team wins.

“American” uses one round of bidding with “inkle” bids replacing the 6-level. “Australian” allows multiple rounds of bidding and includes 6-level bids.

“To ±500” plays the game until one team has positive or negative 500 points. When “# of hands” is selected, the game is played only for the number of hands selected in the “Play # of hands” option.

Must bid to win:

“Yes” means that if both teams go over 500, the bidding team wins. “No” means that the team with the highest score over 500 wins.

“Yes” allows the high bidder to increase his or her bet after 3 others have passed. Choose “Pass” in the bidding options to keep the same bid. “No” ends bidding when 3 players pass after a bid. Australian only.

Misère gets kitty (Nullo gets widow):