Whist is a partnership trick-taking game where players strive to win the most tricks possible. It is played with a standard 52-card deck where Ace is high. Trump is chosen randomly to be the suit of the last card dealt.

The team that takes the most tricks each hand is awarded one point for each trick over six. For instance, if a team takes 8 tricks, they score 2 points (8 – 6 = 2).

Classic Whist can be played with an optional honours bonus (see Options, below). If enabled, the team holding 3 of the 4 trump honours (Jack, Queen, King, or Ace) is awarded an extra 2 points. If holding all 4 trump honours, they are awarded 4 points. Note that this bonus is earned based on cards dealt, not cards captured.

Bid Whist is a partnership game where players bid to determine trump, specify the number of tricks they expect the partnership to take, and whether high cards or low cards win the trick (“uptown” or “downtown”).

The team winning the bid and making their bid earns one point for each trick over six. Failure to capture the number of tricks indicated by the bid results in the bid level being subtracted from their score.

Bid Whist is commonly played with a 54-card deck: the standard 52-card deck plus two Jokers, one red and one black with the red Joker being the highest rank.

Trickster Whist offers a game option to set the number of jokers to 0, 1 or 2 (see Options, below).

Twelve cards are dealt to each player. The remaining cards are left undealt and comprise the kitty. These are counted as the first trick taken by the team that wins the bid.

Depending on the number of jokers, the kitty will be 4, 5, or 6 cards.

Following the deal, starting with the player left of the dealer, each player has one opportunity to bid. Initial bids consist of a level and an indication of how the hand will be played. These indications are “NT” for a no trump hand or a down-pointing or up-pointing arrow.

The “level” of the bid means the bidder must take 6 + level number of tricks to win the hand. For example, a level 3 bid means that 9 or more tricks must be taken to win the hand (6 + 3 = 9). Note that one trick is awarded “free” for winning the bid, representing the kitty. 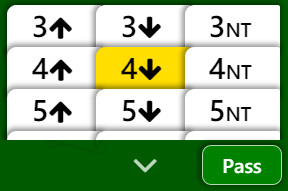 If, during the initial round of bidding, the first three players pass, the dealer must bid.

After the bid is set, the player left of the dealer leads the first trick.

However, if the bid is no-trump, the jokers have no value and cannot win a suit in which they are played. If a player leads a joker, the suit of the trick is determined by the first non-joker played in that trick. These two rules means that the jokers are worthless in a no-trump contract.

The team that did not win the bid scores nothing.

“Bid Whist” incorporates bidding to determine trump and the rank of cards. “Classic Whist” is always Ace-high with trump determined by the last card dealt.

“Yes” awards a bonus when holding 3 or 4 honours. “No” disables this bonus. Classic Whist only.

“Yes” means a low (downtown) bid beats a high (uptown) bid of the same level. “No” means low and high bids of the same level are considered equal and to bid higher, either NT or the next level must be chosen. Bid Whist only.

“Yes” adds the cards from the kitty to the high bidder’s hand. He or she then discards an equal number of cards. “No” keeps the cards in the kitty out-of-play. Bid Whist only.

“Yes” scores an NT bid at twice the normal value for its level. “No” scores NT bids normally. Bid Whist only.

“Yes” gives the defending team points for tricks they take over 6. “No” only allows the bidding team to earn points. Bid Whist only.