Trickster Pinochle is an implementation of single-deck partnership auction pinochle (a game option offers single round bidding). It is a trick taking and melding game where players score points by capturing cards worth points (“counters”) and by forming combinations of cards into meld. The game has three phases: bidding, melding, and trick taking.

Trickster Pinochle offers two scoring styles we call “Classic” and “Modern.” In classic scoring, bids are multiples of 10 and meld such as Aces Around are worth 100 points (often called “100 Aces”). In modern scoring, bids increment by 1 and all the classic meld values are divided by 10. (More on meld values and card point values below.)

Pinochle is played with a 48-card deck consisting of 2 cards per rank of ranks 9 through Ace. The order of ranks from top to bottom are A, 10, K, Q, J, and 9. Note that the 10 is elevated to a position just below the Ace.

Double deck Pinochle uses an 80-card deck consisting of 4 cards per rank of rank 10 through Ace.

Trickster Pinochle offers an option to play with a kitty (single deck only). If playing with this option, 11 cards are dealt to each player and 4 cards are placed in the kitty (15 cards dealt and a 3-card kitty in the 3-player game). The kitty is added to the high bidder’s hand before he or she declares trump. The high bidder (“declarer”) must discard an equal number of cards before trick taking starts so all players have the same number.

Following the deal, starting with the player left of the dealer, players bid to become the player who declares trump (the “declarer”). Player must bid higher than the previous bidder or Pass. Once a player has passed, he or she is out of the bidding. When all but one player has passed, the remaining high bidder becomes the declarer.

At this point, the declarer chooses the trump suit. If playing with a kitty, the kitty is revealed to all players and then added to the declarer’s hand prior to choosing trump.

As an aid to bidding, Trickster Pinochle displays a meld summary bar over the player’s hand. This bar shows meld points by suit. By clicking on a suit/number pair, we display the meld if that suit was trump. 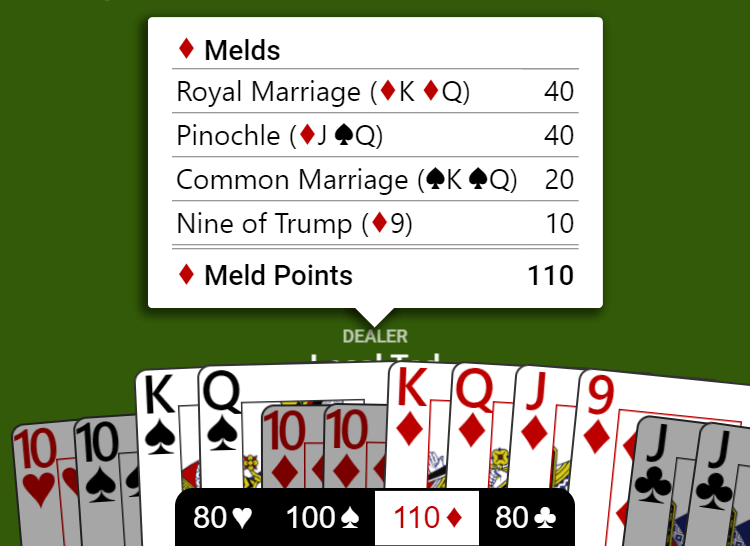 Meld if diamonds were trump shown by clicking “110♦” in the meld summary bar.

The purpose the pass is to improve the declarer’s hand – either their meld or their trick-taking ability.

Passing is not available in the 3-player game.

After the bid is set and the declarers have passed (if enabled), players reveal their meld. Trickster Pinochle does this automatically starting with the declarer and going around the table clockwise.

This rule can be turned off by setting “Marriage+ in trump” to “No” (see Pinochle House Rules Options, below).

After meld are revealed, trick taking starts with the declarer. Play continues clockwise following the led suit, if possible, or playing another legal card if not. Play continues until all cards have been played.

Note that cards are not all the same point value. Some cards are “counters” and other are not. Depending on the game options, even counters may have different values. This can be important when sloughing cards on a trick being taken by your partner or the other team.

Must Head Trick If Trump Led

Following trick play, the points of the teams’ meld and taken cards are added. If the declaring team’s points exceeded their bid and they captured at least one counter, they score all their meld and taken points. If they fail to make the bid or capture no counters, the value of their bid is subtracted from their game score.

The defending team is credited with all their meld and taken points regardless.

Trickster Pinochle does all this computation for you and displays the results in a summary on the scorecard. You can view each teams’ score details by clicking on the “Details” link next to their score summary. 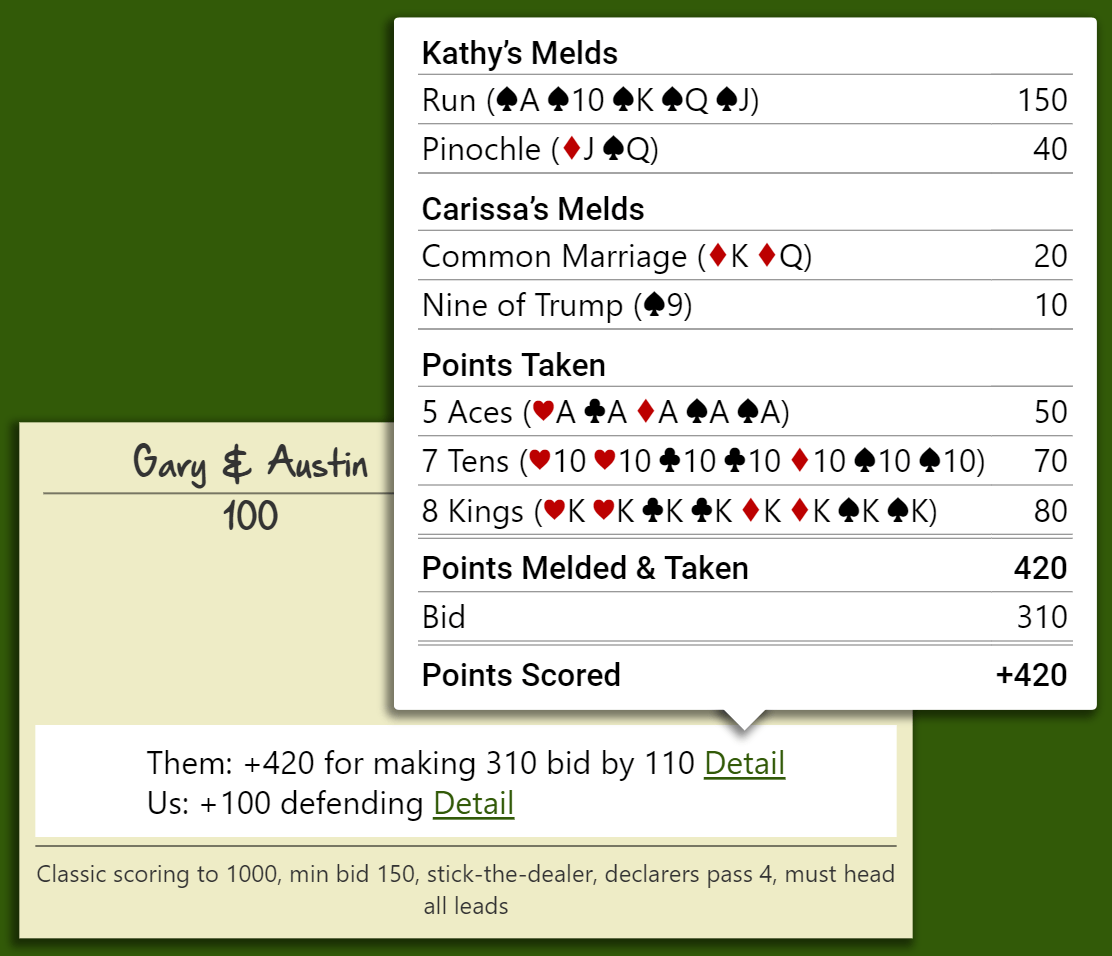 An end-of-hand scorecard showing the score details of the declaring team.

The following table shows Trickster Pinochle’s meld and their point values in the two scoring styles.

Meld may share cards between them except for a Run or Double Run and a Royal Marriage.

Trickster Pinochle supports three ways of scoring counters in the Classic scoring style. We identify these by the cards which count. In the Modern scoring style, only A, 10, and K count and they count 1 point each. The following table shows the point values per card rank for each set of counters.

Regardless of which cards are counters, there are 30 points per rank. With 8 cards of each rank in the deck, that’s 240 points. An additional 10 points are credited for taking the last trick resulting in 250 capturable points per hand (25 for modern scoring).

“3” for a 3-player individual game or “4” for a 4-player partnership game. Single deck only; double deck is always 4 players in partnership.

“Auction” for multiple round bidding. Bidding continues until only one has not passed. “Single” offers only single round of bidding.

“2,” “3,” or “4” indicates that the declarer and his or her partner exchange that number of cards after trump is declared. “None” means there is no passing of cards. 4-player games only.

“Yes” places the number of cards equal to the number of players in a kitty which is added to the high bidder’s hand. “No” deals all 48 cards to the players. Single deck only.

“Yes” means the declarer must have a marriage or better in trump or they automatically fold following melding. “No” removes this requirement. Double deck only.

“Yes” means the declaring team must have at least 20 points (200 in classic scoring) in meld or they automatically fold following melding. It also requires that the defenders have 200 in meld or their meld is not scored. “No” imposes no such restrictions. Double deck only.

“Yes” means a player with 5 or more 9s can call a misdeal as their first bid. Single deck only.

Two pinochles score 80 points (8 for modern scoring) instead of 300 (30 for modern) for a double pinochle. Single deck only.

Adds a 300-point (30 for modern scoring) meld for having 2 kings and 2 queens of trump but not having a double run. In double deck, this also enables Triple Royal Marriage for 600/60 and Quadruple for 900/90.

Must trump if void:

“Yes” means that a player void in the led non-trump suit, must play trump if they have any. “No” means a player may slough even when holding trump. Applies to “Must head trick” options “Trump Led” and “Never.”

“Yes” means a team must take at least 20 points (200 in classic scoring) during trick-taking or they score zero. “No” imposes no such requirement. Double deck only.

“Yes” requires the winner(s) to be either the bidder(s) who made their bid or the opponents who set the bidder(s). “No” means the player(s) with the highest score over the play to score wins. Applies only when “Play” is set to “To score.”