This help file does not try to explain the game of bridge. Instead, it explains certain details of the Trickster Bridge implementation.

Trickster Bridge supports the bidding conventions of the Standard American Yellow Card (SAYC). This Preview recognizes a large subset of possible SAYC bids. When we encounter an unimplemented sequence, our computer players will pass or suggest you pass. 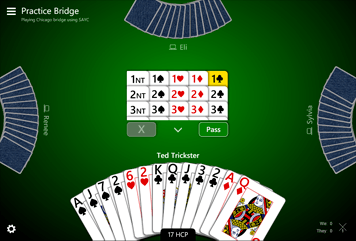 We present possible bids using a digital replica of a standard bidding box. We highlight the suggested bid in yellow; suggestions to pass, double, and redouble are highlighted with a white glow around the button. During bidding, we display your count of high card points at the bottom of the screen. 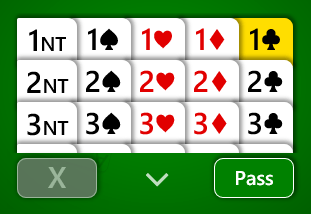 When you move your mouse over any bid (or press and hold on a bid on a touch screen), we display a bubble explaining the bid. 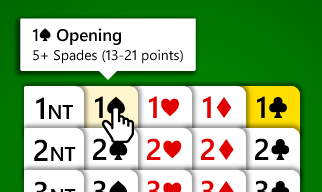 Hovering over the 1♠ bid shows what it means

To make a bid, simply click or tap it.

After all players have placed their first bids, the game board will look similar to this: 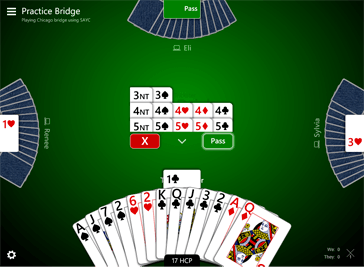 Note how players’ bids are displayed. If you click or tap a placed bid, we explain what that bid means in SAYC. 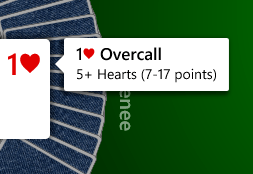 Play of the Hand

Play begins with the player to the declarer’s left leading. The dummy’s cards are exposed after the lead which is the first play of the dummy. 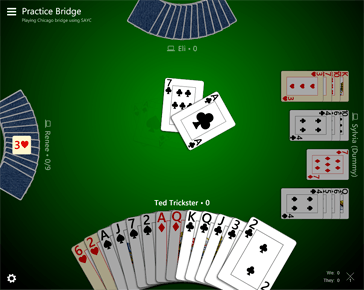 Board with dummy exposed

On large enough screens, the dummy is displayed in traditional layout; on smaller screens it displays as a flat spread of cards.

Play proceeds as you’d expect. Click or tap a card to play it. Your suggested card is displayed slightly raised. In the Preview, these suggestions are dummy-aware but still sub-optimal; no conventions are followed for the defensive lead.

When you are the declarer, you play both your hand and the dummy’s hand. Dummy’s suggested cards are displayed slightly left-shifted. In both hands, you simply click or tap a card to play it. 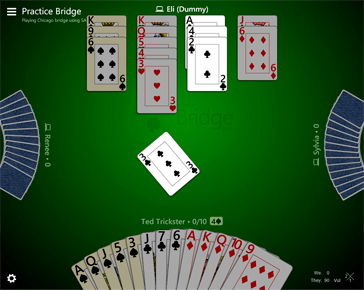 The scorecard is displayed automatically at the end of each hand. You can display it at other times by choosing the Scores item from the main menu. 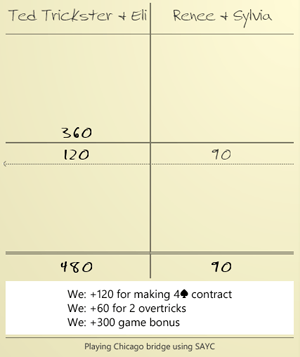 The scorecard shows contract and bonus points for each team along with a total at the bottom. It also displays an explanation of the points awarded in the last hand. Game winners are designated by the dotted line with the small arrow indicating the team that won that game.

The score summary in the lower right corner of the screen (displayed only when there’s room) shows the total score for each team, an indication of which team is vulnerable, if any, and, in Chicago bridge, the traditional X display indicating the current hand out of four.

“Chicago” is always four deals scored Chicago-style. “Rubber” is played until one team completes two games of 100 contract points each or for a set number of deals (see Number of Deals, below).

“Yes” awards a bonus of 150 points if team is holding 10–A of trump; 100 points if holding 4 of 10–A in trump. If playing a No Trump contract, 150 points are awarded if holding all four aces. “No” means no honors bonus awarded.

“Yes” allows decks to be uploaded using the Upload Decks button in the Current Game item in the main menu. Uploaded decks are used starting on the next deal following upload. Join and Practice games only.

Best hand to me

“Yes” gives the hand with the highest opening bid to the practicing player following a random deal. “No”: all hands are dealt randomly. Practice games only.

“Bids & Cards” allows players to undo their previous card plays and bids. “Bids” allows only bids to be undone. “No” does not allow any undo. Join and Practice games only.